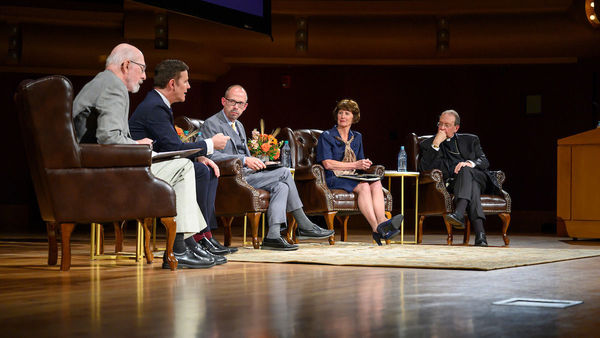 Moderated by John Allen, veteran Vatican journalist and editor-in-chief of Crux, the panel included perspectives from Juan Carlos Cruz, a sex abuse survivors’ advocate; Baltimore Archbishop William E. Lori, who has been heavily involved in sex-abuse-related Church reforms; Kathleen McChesney, a former FBI executive assistant director who helped establish the U.S. Conference of Catholic Bishops’ “Charter for the Protection of Children and Young People”; and Peter Steinfels, a lifelong religion journalist and educator whose prolific writings include a thorough examination of the 2018 Pennsylvania grand jury report on clerical sex abuse in six dioceses.

Watch the Video   See Photos   Read about the Panelists

View all "The Church Crisis: where Are We Now?" photos