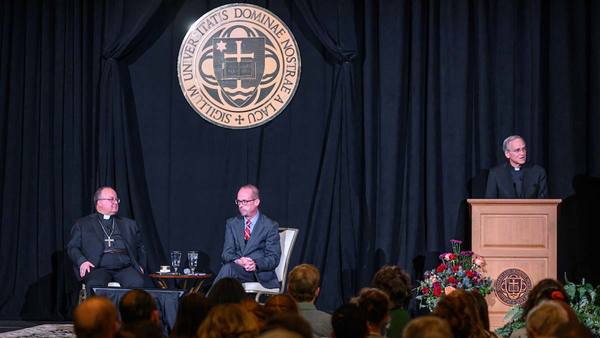 In the second major event of the 2019-20 Notre Dame Forum series, Malta Archbishop Charles Scicluna, adjunct secretary of the Vatican’s Congregation for the Doctrine of the Faith, engaged Notre Dame students and members of the community in a Q&A session Wednesday evening (Nov. 13) in the Dahnke Ballroom of the Duncan Student Center. Archbishop Scicluna leads the Vatican’s fight against sex abuse.

Rev. John I. Jenkins, C.S.C., president of the University of Notre Dame, welcomed the participants and attendees saying, “Inspired by the command of Christ to St. Francis, ‘Rebuild My Church,’ we’re hoping that our discussions can help illuminate a way forward in a challenging time for the Church.”

John Allen, veteran Vatican journalist and editor-in-chief of Crux, moderated Wednesday’s gathering and introduced Archbishop Scicluna as one of the 10 most remarkable people in the Catholic Church whom he has ever met.

In some opening remarks, Archbishop Scicluna emphasized to those present that to truly understand the clerical sex abuse scandal, one must meet victim-survivors, listen to their stories and understand that the abuse is also a spiritual betrayal.

“Certainly there are physical and psychological marks, but there is a spiritual dimension,” he said. “Victim after victim asked me, ‘Where was God when I was being abused?’ and that is, I think, a fundamental question — the crisis of faith.” 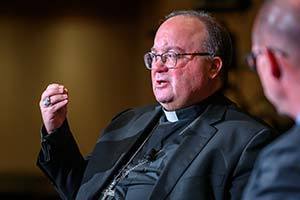 Asked about concrete steps and initiatives the Vatican has taken to address the scandal, Archbishop Scicluna detailed new Church laws on mandated reporting, specific definitions of misconduct and vulnerable people, protection of people who report misconduct, obligations on dioceses to create accessible places to report misconduct and specific expressions of the duty to care for victim-survivors. He added that papal nuncios hold an essential role in making sure bishops worldwide follow the directives, while admitting that implementation will take time and will operate somewhat differently across various cultures.

Members of the audience asked Archbishop Scicluna whether he believes clerical sex abuse is connected to the vow of celibacy taken by Catholic priests or to same-sex orientation. In his responses, he said that it is always dangerous and unfair to blame it on a category of people, and also that there is no nexus between celibacy and misconduct. He added that sex abuse shows a deficit of the understanding of celibacy and that in reading hundreds of cases where priests failed terribly in this commitment, he found that “there was a difficulty to live celibacy because people were not in love. In order to be chaste in celibacy, you need to be in love with Jesus and with the people of God. When you are not, you abuse the people of God, and your misconduct is an expression of a lack of love — a lack of empathy — and this is true for all of us called to chastity.”

An audience member asked Archbishop Scicluna about how to talk about clerical sex abuse with friends who are critical of the Catholic Church.

“Humility, I would say. Denial is natural, but it doesn’t work. Engage non-Catholic friends because we can learn from them,” he said.

He later added: “We ministers need to be humble enough to tell our people it is not about me, it is about Jesus Christ. Don’t believe in me, follow me — follow Jesus.”

In closing, Allen asked the archbishop where his passion for such a difficult subject comes from, to which he replied: “We owe it to the innocence of our young people and our kids — whatever it takes to defend their innocence, their faith and their integrity.”

In October 2018, following the release of the Pennsylvania grand jury report, Father Jenkins announced a series of initiatives the University would undertake to address the scandal. One was the establishment of a task force to oversee awards of up to $1 million in grants to Notre Dame faculty for research that helps address some aspect of the crisis. Applications are currently being evaluated.